Are 5 Hour Energy Shots Good For You? 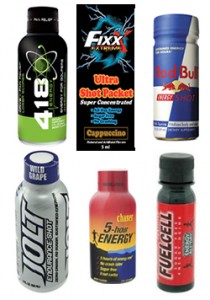 I have had a lot of experience with different types of energy drinks and energy shots. The question is though are they good for you? Energy shots come in a lot of different brands now a days, and even Red Bull who only used to make energy drinks, has now diversified into the energy shot business. These energy shots are easier to slam down compared to the standard energy drink. Most energy drinks are carbonated which doesn't make drinking them any easier. This is why energy shots were born. Most energy shots contain about 200 milligrams of caffeine which is about as much as 2 cups of coffee, depending on the coffee. They also have 100 milligrams of taurine, which is an amino acid. They also have loads of B vitamins that are in the form of niacin. This causes a flushed feeling in a lot of people and might even make their faces turn red. Don't worry this is rare, and doesn't happen to everyone. Some energy shots might contain green tea, or gaurana as an added boost. Taking all of these in conjunction might not be wise, especially if done in excess. Some people even mix these drinks with alcohol hoping they will offset the drowsiness that comes with drinking alcohol so they can drink more. This is also a bad idea because of the side effects. It is also easy to forget how many shots of energy you have had while you are drinking, not to mention you might over do it on the alcohol. Either way you look at it this has the potential for disaster. Some of the side effects of drinking these energy shots is that you could have mood changes, nervousness, and insomnia with every single energy shot you take. I usually don't like to take an energy shot after 3pm because I am always afraid I won't be able to sleep. As long as you do that you should be fine. Any energy shot taken after 3pm has the possibility of making you not be able to sleep that night. I have known people though that can take 3 energy shots a day and never have trouble sleeping. I guess this depends on how your body handles all of these ingredients. Some people can handle it, other people get jittery and nervous. It is also proven that energy shots can make you have an irregular heart beat. This is scary enough for some people not to want to take it. You should know though that the irregular heart beat comes with being nervous. The more nervous you are, the more irregular your heart will beat. This I believe is obvious. Some people have also reported that they get nausea while taking these shots. If you can handle lots of caffeine and you know your body though, this could be avoided. Some people can handle caffeine better than others, and most of these side effects are a direct result of the caffeine amount. If you have high blood pressure, you might also notice a spike in your blood pressure reading. This however is pretty normal with caffeine in general. Something that is pretty serious though is if you have too much vitamin B6 (which is present in most of these shots) on a regular basis, you could be looking at nerve damage. This has been proven.

So are energy shots good for you? It depends on you. If you are pregnant it might not be a good idea. If you can't handle a lot of caffeine or have high blood pressure, you could also feel these side effects more than others. Me I love caffeine and this cuts the time of making coffee out of my morning, and it doesn't generate as much bad breathe like coffee. Just listen to your body, never take more than 1 shot of energy unless you know how your body is going to react to it. After you know, I wouldn't exceed 2 shots a day. Try to find other sources of energy because too much of this can't be a good thing. Green tea is still an excellent way to start your morning.
by bizong at 10:17 AM